Get Started
The Harvard Dictionary 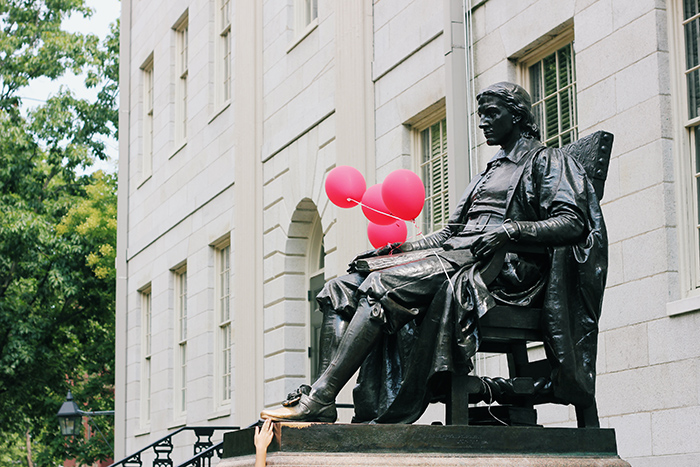 Early in the second semester of your first year, students group themselves into “blocking groups” of two to eight people with whom they enter the Housing lottery. On Housing Day, in early March, blocking groups are assigned to one of the 12 upperclassmen Houses, where they will live for the next three years.

The online system used by every course web page. Allows you to find the syllabus and submit assignments. Occasionally shuts down at incredibly inconvenient times. Run by a malevolent panda riding a unicycle. You’ll understand what we mean soon enough.

The larger-than-life graduation ceremony at the end of the year. In the past, speakers have included J.K. Rowling, Bill Gates, Mark Zuckerberg, and Oprah. There are never enough seats and somebody typically faints, but otherwise it’s pretty spectacular. Protocol for the ceremony is written into the Statutes of the Massachusetts Bay Colony, because Harvard is old.

Short for “competency”—the process by which many campus organizations, including the Crimson, the Advocate, and the Lampoon, recruit and select new members. Comps generally comprise several rounds of submissions and revolve around the completion of representative work. Some are more intensive and selective than others, so do your research before committing to five of them.

Harvard’s word for “major.” Students can also pursue a minor, known around here as a “secondary,” or earn a “citation” for languages.

Now defunct, Harvard classes used to begin seven minutes past the hour and end on the hour, a schedule known as “Harvard Time.” You might hear upperclassmen reflecting fondly on the good ol’ days, and maybe even have a professor or two who acts like Harvard Time is still a thing. Some extracurriculars and social situations might still function this way, so account for those seven extra minutes. Or more.

Each year on Housing Day, representatives from the 12 upperclassmen houses swarm through freshman dorms and scoop up blocking groups to claim as their own. Afterwards, everyone assembles at Annenberg to celebrate.

Pinocchio’s Pizza on Winthrop St., off of JFK St. Famous for its Sicilian slices, its enigmatic murals, and the crowds of students that line up at the door on weekend nights.

Starting at midnight the night before Exam Period begins, students assemble au natural in the Old Yard to do a naked lap as onlookers cheer and the Harvard Band performs encouragingly.

The three upperclassmen houses—Cabot, Currier, and Pforzheimer—located in the Radcliffe Quadrangle, about a 15-minute walk from the Yard.

The week before Exam Period, during which classes do not meet and students sleep, study, sleep some more, and rewatch missed lecture videos by the dozen.

The first week of every semester, during which students can stop in and attend (“shop”) as many classes as they like before deciding which ones to take. The administration is considering axing this tradition too. Harvard, this is why we can’t have nice things.

University Health Serivces, a.k.a. where you get your cold packs to combat the freshman plague.