Get Involved
The Big Dogs on Campus 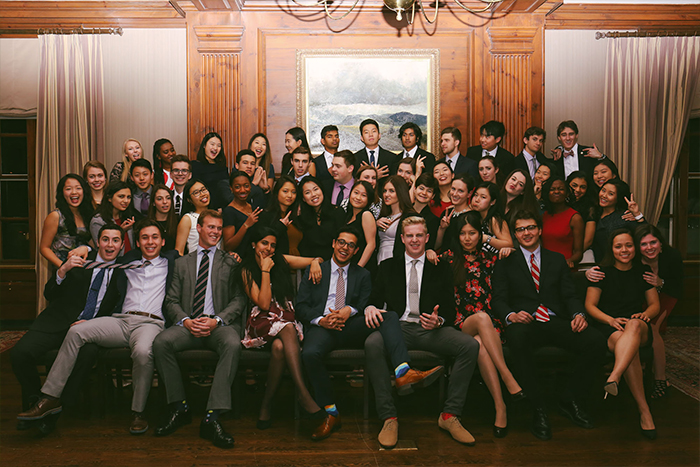 HCCG, even with its rep, isn’t just another pre-professional group on campus. After the application (there’s no comp), you jump right in your first week. From Fortune 500 companies to international nonprofits, your tight-knit case team will gain valuable on- the-job experience as you develop important skills for a snake future on Wall Street or a transformative PhD, and everything in between. And the casework isn’t even the half of it. You’ll get the chance to experience fine dining downtown, see the Boston sports teams in action, and maybe even party in a castle. Even if you think you aren’t ready to sell out just yet, stop kidding yourself and see what HCCG is all about.

“BYOB” and no, that doesn’t mean “Bring Your Own Bottle.” Enter Harvard Student Agencies, the largest student-run corporation in the world. When the kids talk about selling their soul to VC and consulting firms, this is where it begins. HSA has a ton of agencies under its umbrella including The Harvard Shop (a multi-million dollar business), HSA Cleaners and Dorm Essentials (that hot guy who delivered the microfridge to your room), and Let’s Go, Inc. (a 59-year-old travel guide that sends students abroad on all-expense-paid trips to update content and blog about their adventures—a pretty killer gig, if you ask us). HSA prides itself on giving students just like you the opportunity to run their own business and offers countless jobs to individuals around campus. If you become a manager, you’ll learn how to make budget, how to employ people, and how to serve angry customers—all the rewarding things that come with running a business. Throw Aunt Marge a business card when you visit for Christmas because you’re corporate, bitch.

If you’re one of those kids who thrives on that dosage of 538/Politico/CNN/The New York Times political coverage, we probably don’t have to tell you much about The Institute of Politics. Yes, it’s where you can rub elbows with a bunch supposedly famous and prominent politicians—just what they’re doing at Harvard for a semester should say something about their purported status in the political world. And, yes, it’s where you can meet a bunch of other tight-ass pricks who want to be a U.S. Senator or, god forbid, the President of the United States (we have actually witnessed freshmen introduce themselves in this way at the IOP). More substantively, though: the IOP offers a host of different programs, from policy research to educational seminars to acting as a famous person’s assistant for a semester—er, liaison, we guess. Even if you don’t sign-up for one of these term-time programs, though, you’ll probably rub proverbial elbows with The Institute at some point. They host a bunch of actually famous speakers, and they give out a bunch of money for summer internships. So even if you have only Congressional ambitions for a career in politics, make sure to at least brush-up on your House of Cards references and Senate leadership for your visits over to another one of Harvard’s acronyms.

The only Harvard institution more widely participated in and simultaneously widely hated than maybe Ec10, The Harvard Crimson, your friendly hometown daily, is part-legitimate news source, part-dining hall conversation fodder (did you see that dumb editorial?). If you’re like any of the literally of hundreds of other kids at this school, you’ll probably find yourself comping Cambridge’s only breakfast daily at some point during your four years here—likely in your first year, not that senior fall isn’t the perfect time to try something new. Between a news board, business board, arts board, design board, editorial board, tech board (this list goes on), you could probably force yourself to choose some kind of resume-padding activity, or at least that’s what they’ll tell you. Not that membership on The Crimson will catapult you into Harvard’s social elite (breaking news!); they seem to spend most of their time hanging out—and occasionally making out—with each other at parties that more closely resemble your quaint family barbecues than the college blow-outs you imagine are taking place somewhere in the world. Even if you don’t comp, though, you’ll probably find yourself reading and maybe even laughing at (not laughing with) a Crimson article or two during your years in Cambridge. Oh, and the Lampoon will steal their shit every once in a while, which even the most casual Crimson hater can appreciate—fuck that chair for no reason in particular. Occasionally, a story in the paper may make you thankful that there are a few no-lifer kids slaving away on the paper instead of, you know, doing their readings and having fun with their lives and all that.

That Applied Math/Ec concentration have you feeling that maybe you should, you know, stop being such a selfish shit and help someone else every once in a while? Your sociology concentration have you feeling like a lone-warrior out to save the world and leave it better than you found it? Your English concentration have you feeling like little kids are hilarious assholes that you want to hang out with and laugh at? Well, sorry—Harvard’s got nothing for you. Just a lot of books and polysyllabic words. Kidding! (Kind of.) Anyway, there’s PBHA, short for Phillips Brooks House Association. An umbrella organization—unfortunately, this does not mean it will keep you dry in a rainstorm—PBHA organizes and funds a bunch of individual service programs in the Greater Boston area. Save the environment, save the children, you name it—you and PBHA can save it. That’s how community service works, right? The time commitment and general tenor of the programs within PBHA can vary a lot, so make sure to ask around at one of the semesterly open-houses—weekends or tuesdays? Two hours a week or twenty?—before choosing your cause.